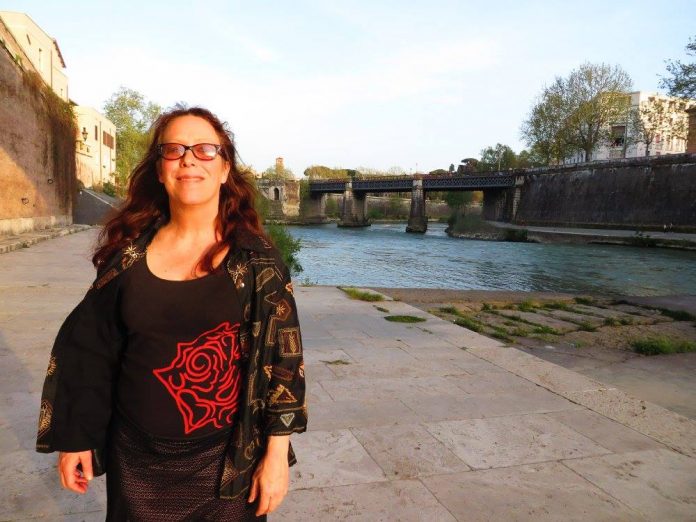 I’ve been a fan of Amy’s music since (way back) in the early 1990’s… as you’ll see in this Winter 1995 interview with her – times were different then, but her music is still stronger than ever, despite her rigorous touring schedule!

Zzaj Productions considers (our) return to (what’s termed in th’ military as) “the world” a MOST fortunate occurrence… if for NO other reason than that it makes access SO much easier! In the following interview, this is demonstrated in MUCH more effective forma than I could possibly “elaborate” upon in wordz… we are most appreciative to Amy Denio for “fitting in” the time to speak with us… after a (rather heavy) snack in the OlyWa ancient landmark “Spar Cafe”, we went to the streets (a bench near the downtown branch of the Olympia Federal Savings bank) to conduct the interview. Since most previous interviews have been by mail, my “prejudice” towards that method showed a bit, I guess, but it was still MUCH fun… enJOY, people!

Zzaj: Was that for music, or…

Zzaj: Are ya’ thinkin’ ’bout doin’ that?

Amy Denio: Yes, except for the time. There’s some cafes in Seattle, where you can (real cheap) have a page on a website, though.

Zzaj: First question I had “formally” was – How was Eugene?

Amy Denio: Well, it was a most surreal night, heh! heh! A group called “Bloodloss” played right before us (members of “Lubricated Goat”) and “Mudhoney” (Mark Arm from Mudhoney)… some of the most sad and dark music I’ve ever heard & there were these drunken sorority sisters who ev’ry once in a while would get up & dance these really hilarious happy dances to the saddest, weirdest music I’ve ever heard…

Zzaj: Was your music sad&weird?

Amy Denio: Naw, not too sad&weird, it was more, ah, feisty…

Zzaj: So, they didn’t dance for that?

Amy Denio: Naw, they danced for that too… didn’t especially matter what it was.

Zzaj: What have you done lately? Recording & such?

Zzaj: Any particular “genre” you can attach it to?

Zzaj: You mentioned you knew (my ol’ friend) Wally Shoup, back in Colorado… how’d that come about & in what context?

Amy Denio: Yeh, it was thru this fellow named Bob Tudor, who is a GREAT improvisor…. I’d never come across improv (well, my mother plays a jazz bass, so I’m “familiar” with improvising), but I’d never heard this “free” music until I moved to Colorado Springs.

Zzaj: Does your mother still play?

Amy Denio: So, through Bob Tudor, I heard about Wally…

Zzaj: Who do you most enjoy playing WITH?

Zzaj: Anybody else, back over the years?

Zzaj: History on the Billy Tipton sax quartet… you mentioned “dance” being a part of it – is that still true?

Zzaj: Do you really enjoy that kind of “integration” of the arts? Dance/music?

Amy Denio: Oh yeah! Tho’ I haven’t really “hooked up” too much with poets! I see a lot of, sort of, “wanking”, you know “ME”, “I, ME” in the Seattle poetry/improv scene, & I’d rather the players/poets be more – in “touch”, to communicate the “greater”…

Zzaj: OK, so before it can communicate to the audience – th’ players’ve got to “get together”

Amy Denio: Yeh, kinda’ relates to my idea about “spoot” music… the idea that people are really “actively” listening – rather than just showing off their technical prowess. &, also exercising a lot of empathy – pushes forward whatever ideas are floating about.

Zzaj: How do you feel about music that only “stays in one place”?

Amy Denio: As I get older, I enjoy “drone” things kind of more & more… I may sorta’ be getting through the last stages of my adolescence. (laughs heartily) Don’t know if this is certain, but… & a lotta’ th’ “noise” things I was doing earlier – I don’t find so necessary now – you know what I mean?

Zzaj: OK, you said you were in “Iron Tortoise” (meaning Birmingham) – what did you think of that scene?

Amy Denio: Ah, I thought it was g-r-e-a-t. It was great to see Davey & LaDonna in their “home turf”.

Zzaj: Yeh, it was kinda’ a fun scene when I was there & I was just wonderin’ if it’d changed that much.

Amy Denio: Yeh, send tapes to Rotcod Zzaj… that’s how I got started… you know, Sound of Pig & all that – he’d bootleg my stuff, send it off to Tel Aviv & I’d get letters from all over the WORLD.

Zzaj: Imagine now that yer’ playin’ so MUCH, you don’t get a chance to listen to a lot of other people’s music.

Amy Denio: Yeh, I get so many tapes that I (sometimes) forget whose it was.

Zzaj: Yeah, not that ya’ didn’t WANT to listen, but you were just busy… have you listened to any D.I.Y., say in the last 10 years?

Amy Denio: Yeh, ‘specially this guy Mike Hovancsek – from Pointless Music in Kent – it’s really WILD what he does.

Zzaj: Like to hear more about what you’ve done recently.

Zzaj: When yer’ actually doing it, do you try & get it done RIGHT THEN – or do you like to overdub?

Amy Denio: Naw, I usually try & get it done RIGHT AWAY.

Zzaj: Can “untrained” players do “spoot”?

Amy Denio: Well, yes; especially if they LISTEN. With a sense of “community” – at least that’s my hope.

Zzaj: Is it to be aware of other players or the music, or what?

Amy Denio: I think on every level… whatever space they’re coming from.

Zzaj: Is it better to be “musically trained”?

Amy Denio: Huh uh! No, I don’t think so. I think sometimes musical training can really hamper the ability to be “empathetic”.

Zzaj: Any tips or pet peeves on self-promo? Is it harder for “women” players, or…

Amy Denio: Well, no, it’s not a gender issue at all.

Zzaj: Is self-promotion necessary for musicians these days?

Amy Denio: Depends on what your financial interest is in doing th’ music. It’s important to be promoting yourself, in order to make other contacts.

Zzaj: Well, where are you going – physically as well as musically?

Amy Denio: I’ll be going to Europe for a couple months with the Billy Tipton group & then the “Pale Nudes”. Then I’ll come home in December & sleep.

Amy Denio: One thing that’s really helped me a lot is Yoga. Helps me to “stretch out” a lot.

Rotcod Zzaj: Primarily for the breathing?

Zzaj: Where were you from, originally?

Amy Denio: My family was from Boston, then they moved me to Detroit.

Zzaj: Does “Motown” influence your music?

Amy Denio: Yeh, that music is really passionate, & I try & integrate that…

Zzaj: Is there a musical “glut” these days?

Zzaj: This ‘zine believes/promotes th’ idea that the “people’s music” belongs to them… do you think the “D.I.Y.” thing helps that?

Amy Denio: Yeh, I think it’s essential that the “cassette culture” continue to grow. I started in it in ’86 & thought I was “too late”. NOT at all!

Amy Denio: Unavoidable. Will say that I’m back to “analog”. Digital is fine, but there’s no way it can be “smart enough” to relect the “real world”.

Zzaj: So the machines have to be viewed as a “tool”?

Zzaj: Why the Northwest?

Amy Denio: Roommate moved out here & said “people really lOOk at you out there”.

…& that was IT, people! Amy Denio is an absolutely “spontaneous” person (and musician), fun to talk to, fun to listen to & full of energy. You owe it to your own well-being to CHECK HER MUSIC OUT! Once again – THANKS for takin’ th’ time, Amy!

Check her out at SPOOT: 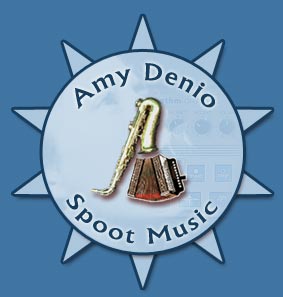