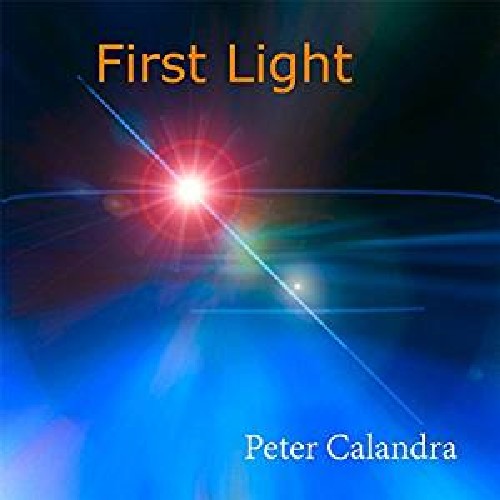 Peter Calandra – FIRST LIGHT:  It was only a few seconds into the first album I reviewed from Peter, “Inner Circle“, that I knew he was going to get very high marks in my review (issue 145, by the way) – I was particularly impressed with his string/synth work.    On his latest effort, to be released in September, 2015, you will be (quite simply) astounded, as you are left with memories of compositions like the 4:09 title track “First Light“… it’s clear that the spirit was guiding him on this exceptional piece, and (again), the strings/vocal strings are just superb.

Peter is the kind of player who lets his music speak for itself, without the usual hype… he has scored over 40 films, and done numerous TV themes (as well as many Broadway shows) – so even though you may not have caught his name in the credits, you have probably witnessed his incredibly buoyant musical signature.  His piano style is full-bodied and lively, painting sonic imagery with every note he coaxes out of his head (& through his magical fingers).  It helped that he grew up with music all around him, and had parents who supported his forays into the professional side of music – his mom, an amateur musician herself, nurtured his musical side even as he started out his career doing the “gig thing” at bars doing blues, funk & other styles; his big break came when he was asked to sub in an off-Broadway production of “Little Shop of Horrors” – and the rest is history, as they say.

The thirteen songs he offers up on this new recording also encompass many of his playing styles… he doesn’t restrict himself to one genre, and is equally at home with New Age, Jazz and (even) “refined pop” – and that is what is really impressive about Peter’s music… he composes “for the moment” and “in the moment”, and achieves results that far outdistance his contemporaries; I was totally enchanted with his earlier “Dreamlike” video (shown below) on YOUTUBE, and have no doubt you will be as well:

You can, of course, find many more of his works on YOUTUBE by searching his name there.  I’m sure there will be some of the songs from “First Light” posted there after the September 21st release, too.

It was the 5:12 “Valley of Two Lakes” that was my personal favorite of all the tunes on this release, though… imagine a dense and rich forest filled with sounds akin to elves and fairies flitting through the leaves, and you’ll have a pretty good idea what this sounds like – the strings on this one are pure magic.  Anyway you listen to these thirteen beautiful songs, you will realize that you are in the presence of pure musical genius, and will treasure these experiences for years (& years) to come.  I give Peter a MOST HIGHLY RECOMMENDED, with an “EQ” (energy quotient) rating of 4.99.  You can get more information about this most creative player at Peter’s website.        Rotcod Zzaj