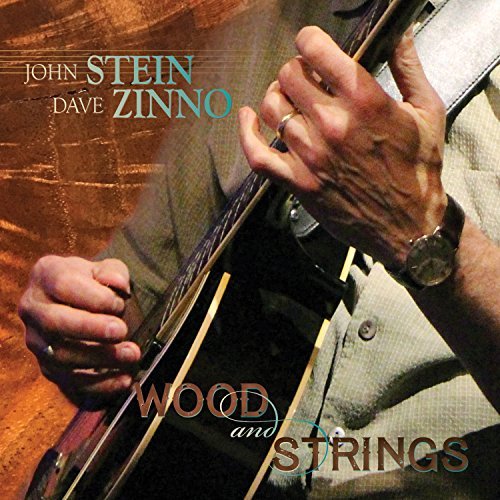 * mighty mellow guitar bass duets * John Stein, Dave Zinno – WOOD AND STRINGS: The collaborations between our long-time contributor John Stein and his bass-playing friend Dave are somewhat rare (a fact I didn’t know), in that there aren’t a lot of recordings that highlight those two instruments together.  One of the most appropriately titled tunes I’ve listened to of late is “Out of Nowhere“… parts of the bass on this one actually remind me of work I’ve heard bassist David Friesen do, but John & Dave’s style is a bit more “forward” in the sonic realm… great style & very pleasant listening!

I’ve reviewed (nearly) every album John has published, so I’m quite familiar with the magic he creates… most recently in issue # 141, and going all the way back to issue # 79 (that’s in the 2011 time frame); I’ve loved every one of his recordings, but this new one (it was released in April, 2017) seems to have a more laid-back approach than I’ve heard before from him… just listen to the superb pacing between John and Dave on “But Beautiful” to get an idea of why I fell in love with this album as soon as it began to spin… no “rush to judgement”, and plenty of time for each player to express themselves most eloquently.  A simple tune, but lovely.

If you’re looking for something just a bit more upbeat, you will dig down deep into what I’ll refer to as the “slinky” sound of “Birk’s Works“… it’s quite easy to imagine myself slippin’ & slidin’ through the back alleys that abounded ’round Frankfurt’s late-night jazz hangouts, circa 1967, as I listened to this one… this kind of jazz is what puts the “ultra” in ultra-cool, folks!

The best word to describe my pick for personal favorite of the fourteen songs offered up for your aural amazement is “timeless”… though it’s one of the shorter pieces, clocking in at 4:43, “Modinha” demonstrates a very unique kind of improvisation that will stand the rigorous tests of the ages and remain a favorite over many centuries!  I give John and Dave a MOST HIGHLY RECOMMENDED, with an “EQ” (energy quotient) rating of 4.99 for this superb album.  You can get more information about these most intriguing players at John’s webpage for the release.   Rotcod Zzaj