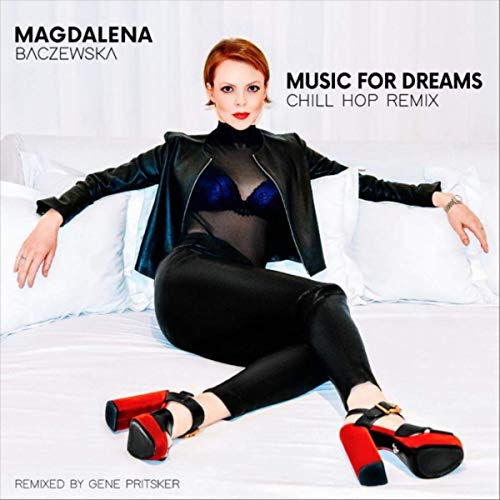 Magical healing music Magdalena Baczewska – MUSIC FOR DREAMS CHILL HOP REMIX:  One of the most beautiful things about reviewing music is that (because I’ve been doing it so long) I’m constantly exposed to new artists and new musical concepts… Magdalena’s new album is the kind of serene magical healing music that inspires the imagination and gives the listener new ways of seeing their dreams… rather than me trying to explain her concept, I (most STRONGLY) recommend that you watch her video for the album and hear it in her own words…

…it’s just wonderful to get such intimate and up-close insights to a recording, isn’t it?  If you SUBSCRIBE to Magdalena’s YouTube topic channel, you’ll be able to hear her mastery from several albums – I did it (right away).

You’ll hear Magdalena’s superb piano here, and she’s joined by Dr. Jordan Stern of Bluesleep, as well as one of our favorite new composers, Gene Pritsker, on tunes like the beautifully calming “Pavane of the Sleeping Beauty“… I was particularly impressed by her wonderful pacing on this tune, and have no doubt that you will be as well!

The captivating mix on “Nocturne C-Sharp, Op. Posthumus” blends influences from many cultures and integrates it with Magdalena’s swirling notes perfectly; this is among the most creative performances I have heard (yet) in 2020… I definitely recommend that you listen to this with your headphones on, at least for the first sitting.

The percussion on “Of Foreign Lands and Peoples (From “Kinderszenen”)” will hold your ears spellbound, and Gene has done a masterful job on this mix for this one… I predict that this song will be getting some MAJOR airplay on stations ’round the globe!

After listening through the entire album a couple of times, it was easy to choose “The Valley of Bells (From “Miroirs”)” as my personal favorite… hints of avant-garde and pure creativity create a healing vibe that will help you transcend the trials and tribulations, to be sure.

I give Magdalena a MOST HIGHLY RECOMMENDED rating, with an “EQ” (energy quotient) score of 4.99 for this marvelous album… I will be looking forward to many more performances from Magdalena… learn more about this fascinating artist on her website.             Rotcod Zzaj