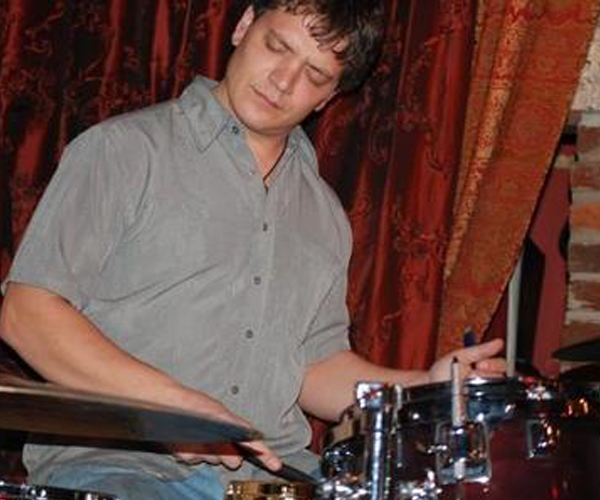 This INTERVIEW was originally published in issue # 40 of my magazine, based on the CD (cover) shown below – Brooke’s playing was high-energy & it immediately struck a note with me – needless to say, I touched bases with him right away to get a few words from him about his playing, projects, etc

Zzaj:  Brooke, many of your compositions/arrangements seem (to me) to hearken  back to the early years of bop, while harmonically and rhythmically, you  encompass futuristic elements … who are your “heroes” in jazz (or is/should  there be such a thing)?

BROOKE: Thanks….there are definitely “jazz heroes” and I think that there  should be.  These icons are what drive musicians and composers like myself to  strive to attain “greatness.”  Whether or not we attain it, is less  important, it’s the journey which is invaluable.  Players such as Miles,  Trane, Parker, Gillespie, Powell, Monk and the list could go on and on,  influence us all, and drive us to be at the top of our game. Drummer-wise, I  started with Jimmy Cobb, Philly Joe Jones, Ed Thigpen and Art Taylor, then  moved on to Elvin, Roy Haynes, and then onto Tony Williams and Jack DeJohnette  .  Two composers that greatly influence my writing are Dave Holland, for his  bass lines, rhythmic excursions and singable melodies, and Wayne Shorter, for  his haunting melodies and harmonic genius.

Zzaj:  This magazine (Improvijazzation Nation) has had an interest in   poetry/spoken word since it started in 1988.  Who wrote the poetry on   your CD, “Modesty’s Odyssey”?  What’s your take on the mixing of words   & music?

BROOKE: Very cool….I actually wrote everything on the CD, including the  compositions, arrangements and lyrics.  Writing has always been another love  of mine, and I used to write a lot of poetry and lyrics for various rock  bands I’ve been in over the years.  This was my first poetic outlet in a few  years, and I was glad I got the chance to write a couple of vocal tunes for  the CD.  Mixing words with music in jazz, can be a touchy subject for some.  Personally, I think of it just as I do with instrumental music; it’s either  good, or bad.  Some believe that jazz is, and should remain, a language void  of actual speech, a language that is understood world-wide.  I disagree.  The  birth of jazz was spawned by work songs and chants, both of which were vocal,  so how can we deny the element of words in jazz?

Zzaj: .mp3 and web-based music seems to be really catching on these   days.  Where do you think that trend will/should take us?

BROOKE: MP3 seems to be a link to the future of music, whether I like it or  not.   I like LP jackets as much as the next person, but web-based music  distribution seems to be where things are headed.  My CD is available at  dozens of online outlets like CDNow and Amazon, (check  http://www.iuma.com/IUMA/Bands/Sofferman,_Brooke/for a complete list) and the sales online,  outweigh the retail national sales.  Also, all of the promotion and reviews  I’ve received have been accomplished via email.  The web is here to stay.

Zzaj:  Your relationship with the members of the “Abby & Norm Group”   must be pretty solid (since many of them were on the album)…   how/where/when did that all come about?

BROOKE: I met Abby and Norm at the New England Conservatory of Music, when  they were doing their Masters and I was finishing my Bachelors degree.  (I  stayed at NEC for my Masters degree as well)  We met while in Bob Moses’  ensemble. (A drummer/composer genius)  Abby & Norm were looking for a new  drummer for their group, and we really hit it off immediately.  The following  year, we recorded their CD “The Book of Norman, ” and continued to play  consistently. We now play a few times a month at the historic “Wally’s Jazz  Club.” When I was thinking of my own CD, they both were the first on my mind,  and I knew they would be perfect for Modesty’s Odyssey. We are recording  their new CD at the end of March, so keep your eyes peeled.

Zzaj:  A focus of this magazine is clearly on independent, home-produced   music.  I have produced a lot of music myself, some of it quite good,   some of it (the really early stuff) perhaps not quite so… what   advice would you offer our readers who produce their own music?

BROOKE: Record yourself as much as humanly possible.  Listening to your  playing, especially live recordings, is the best learning tool imaginable.  Hearing yourself on tape, will give you a great perspective of the groups  total sound, and your place in it.  It teaches you to hear things as an  ensemble when your playing, and to be more sensitive to the overall sound.

Zzaj:  What are your aspirations for your music?  B-I-G label?  Indie   production?  Somewhere in between?  Tours?

BROOKE: Obviously, if Warner Bros. comes knocking, I wouldn’t say no, but  there are great benefits to having your own label.  No overhead costs, so BS,  just the artists working hard, to promote their own music. Modesty’s Odyssey  is distributed nationally by NorthCountry Distributors and online by the  Orchard. The internet is making it possible to compete with all the big boys  and gals, as we mentioned earlier.  I’ve already done some touring, and plan  to tour some with my group to support the release of the CD.  That info will  be posted on my website.

Zzaj:  What would you say to those who (sometimes) say that “jazz is   dead”?

BROOKE: I stepped on it this morning, and it kicked me in the ass so hard,  I’d have trouble believing that was rigor mortis setting in. Seriously, the  only thing dead about jazz, is the name.  Jerry Bergonzi and I chatted about  this very subject at a coffee house a couple of weeks ago.  He said, “Jazz is  a dead term, it doesn’t accurately describe the music you and I play……we  mind as well call it “ZAP Music.”  He’s right, when someone says jazz, a  heckler in the back almost invariably groans.  The music I write is greatly  influenced by jazz and improvised music, but calling it jazz, seems to  confuse people.  The word jazz has been attached to so many different kinds  of music, that the term seems ridiculously vague.

Zzaj:  Do you play other types of music (besides jazz)?  What about   free-form improvised music?  What are your thoughts on that?

BROOKE: Most of the freelancing I do, are jazz gigs, but I love playing it  all.  I’ve played in a dozen rock bands, a hip-hop group, a latin big-band,  Broadway musicals, klezmer, North Indian, etc.  I used to play in a group in  Boston called “Wet Street” which was a free-improv based group.  I love  creating on a blank palette, or with little outlines or guidelines. That’s  where a musician can draw from all of his/her experiences, and create music  without a life-preserver.  Speaking of heroes, the Boston-based group “the  Fringe” is an unbelievable group in that genre.  (George Garzone, Bob  Gullotti and John Lockwood) I’ve been fortunate enough to play with Lockwood  and Garzone in and around Boston, and realized this: It doesn’t matter if you  are playing burning free-jazz at some smokey dive, or improvising polkas at a  Presidential Benefit, when you are on that level of playing, everything  sounds good, and everything swings.

Zzaj:  Your own drum playing seems really focussed, & (somehow)   “crisper” than many jazz drummers I’ve listened to.  Where does all   that energy come from?  I mean, in the sense of a “universal music”…   or do you believe the “source” is totally on the inside of a musician?

BROOKE: Thanks again.  I like being called “crispy!”  Aside from physically  controlling the placement of my notes, using certain drums and cymbals to  propel the music, while laying back on others to create a deeper groove,  there are other elements involved.  I’m not religious at all, but I do  believe there is some sort of plane, that we as musicians, can tap into.  I  imagine it as a level of the atmosphere, that some people rise up into, for  inspiration.  I’ve experienced it many times, where the music feels so good,  you are actually transported outside your body in a way, and you are just on  auto-pilot.  Partially it can be the inspiration of the other musicians you  are playing with, but it also can seem outer-worldly.  Sometimes my  compositions will take off and practically write themselves, finishing them in   10-15 minutes.  The inspiration seems to come from a collective greatness,  that I’m sure applies to all fields of life.  I’m sure you’ve been writing  some music or a feature or review, and the words just flowed out, without any  thought, as if you were but a bystander.  It’s the same plane of  consciousness.

Zzaj:  My own belief is that music should be “fun”, or it isn’t really   music.  Of course, I can get away with that, because I’m not a “fully   trained” musician… give us your insights on how important musical   training is to success as a musician (please), & any other advice you   might have for aspiring musicians?

BROOKE: If it’s not fun, it’s not worth it.  Teaching kids has taught me  that.  If music is all exercises, scales, and etudes, the spirit of music is  smothered.  It would be like kicking a ball into a wall all day, and never  actually getting out there on the field with other kids to play a game.  That  brings up another thought.  Playing with other musicians is the best learning  experience you’ll ever have.  Sure, it’s important to practice by yourself,  to learn the musical language and concepts, but even more importantly, use  the skills and musical language in conversations with other musicians.  Playing with people of a higher level, will kick your butt, (in a good way)  and you will learn from their expertise.  Playing with people of a lower  level can be equally beneficial.  In helping them, you will better  understand.  Education never hurt anyone, who was armed with staff paper.