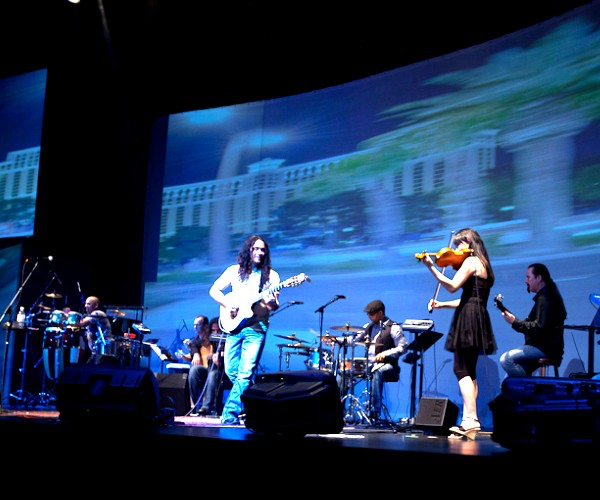 One of the things I enjoy most about doing this magazine is the opportunities I have to “get acquainted” with the artists I review…. when I first started this effort, it was mostly through promoters, but once the INTERNET started kickin’ up it’s heels, I often was able to get in touch with the artist direct… in Russ’s case, I think I first encountered his music on REVERBNATION (or another OMD)… I reviewed a CD from him several issues back, & it just kind of went from there.  Anyway, here’s a really nice/insightful INTERVIEW with him… YOUR chance to get to know this vibrant young artist better – ENJOY!

Zzaj: In the bio I saw, there was very little about where you came from and how you got to where you are now. So, enlighten us, please. Give us a bit more of your background, if you don’t mind.

Russ: I got my first guitar when I was 11 simply because my older brother played the guitar. I had some friends that wanted to form a band but with three guitars and nothing else we didn’t get much accomplished. Ha. It wasn’t until I was 14, when my brother quit playing and sold me his gear, that I started to take it seriously and practice. I spent my formative years learning rock and heavy metal through guitar tabs, videos and anything I could get my hands on. A lot of my favorite rock players from that time were also into classical guitar, which introduced me to the style and eventually lead me to pursue a degree in Classical Performance from the University of North Texas. I played, toured and recorded with various bands during that time all the way up until six years ago when my last band broke up. My producer, Bob Parr, who did my last rock band CD, was in Dallas for some overdubs and saw me play with my six-piece Latin band. Bob thought it would be a good idea to focus on that style and record what would become my debut CD, Bajo el Sol. I’ve wanted to record what I play live in restaurants for years and it felt like it was the right time to do so.

Zzaj: I’ve seen some press that pitches your music as “smooth jazz,” but I hear a much more energetic approach in your work; more of a “Latin jazz” type of playing. Am I right? Wrong? Either way, explain to our readers what YOU consider your style to be, please!

Russ: Sometimes you’ll see it described as “world jazz” as well, but I think the closest description might be “nuevo flamenco.” I’m not true flamenco, jazz, Latin jazz, Cuban or Brazilian but a fusion of styles, sometimes combined together simultaneously, and I do that without worrying about particular rules that go with each style. A perfect example is the song “Dhanyavad” off the latest CD where we don’t do a traditional cha-cha but what I call a “rock ’n’ roll cha-cha.” There is definitely a Latin/rumba base to all my songs, but what I wanted to avoid was having every song sound the same. I also didn’t like the idea of not being able to write a song because it wasn’t “right” for that particular style. I wanted to take what Ottmar Liebert started and expand on it my own way. Smooth Jazz radio has embraced several artists in my style, such as Jesse Cook, Acoustic Alchemy, Lawson Rollins and, of course, Ottmar.

Zzaj: It’s pretty clear to me that guitar is your main instrument. Do you play others, though?

Russ: Some piano, and I like to mess around on anything with a string; but nothing serious other than guitar. I don’t need anything else that frustrates me. Ha.

Zzaj: Your web pages show quite a bit of live performance. Do you prefer performing live or in the studio? Or does it really matter?

Russ: I love both and need them to counterbalance each other. I can understand how an artist would get comfortable with only doing one or the other because it’s two completely different mindsets. When you play live you have to worry about making mistakes, getting a good sound and mix, playing in front of an audience and all of the unknown factors that go into a show. The risk/reward is much greater live and when you pull it off it’s an incredible feeling. In the studio you have to play much cleaner than live, worry more about tuning and intonation, worry about all the other instruments being recorded and know that once you release it there’s no taking it back. On the positive side you can always go back a fix something you don’t like and when a song turns out better than you imagined, that, too, is an incredible feeling.

Zzaj: Who (or what) has taught you the most about the music you play? Has what you were taught been a heavy influence on how you play? Do you play differently now than when you first started out?

Russ: I noticed the same guy at different restaurants playing the nuevo flamenco style five nights a week. After I graduated from college, finding work playing classical was inconsistent at best, so I took an apprenticeship under him and did nothing but rhythm for three years. Eventually I started doing leads and melody and broke off on my own. I’m still using the techniques I practiced when I was playing heavy metal and all the shred guitar stuff, although I’ll grant it’s a bit modified because of the nylon string and guitar neck size. Lately I’ve been getting into gypsy jazz guitar to make my playing less diatonic and to make sure I’m catching the chord changes. My playing has definitely changed now because I’m making phrasing and note choice as important as technique. I believe the perfect combination of the three is in any great solo.

Zzaj: We have quite a few jazz guitarists in our readership. Tell us (and them) what your preferred instrument(s) is/are and why.

Russ: I use a Taylor NS72 CE Grand Concert Classical guitar when I record in the studio because the sound of the guitar really cuts through the mix and I don’t have to fight the frequencies of the other instruments. The guitar also has a “spongy” feel to it that allows me to dig in or play with finesse. I use a Godin Grand Concert SA when I play live because it has a thin body and I can have it set up with low action. I also modified the nut and bridge to have the strings closer like an electric guitar as well. The Godin has a perfect volume balance between the treble and bass strings—which has been a problem with every other nylon I’ve tried—and an advanced on-board EQ system to get a variety of sounds.

Zzaj: How important is musical practice in your routine? Is there ever a time when an artist no longer needs to practice?

Russ: A practice routine early on is important because I believe the majority of your dexterity and muscle memory are developed at a young age. Of course it all depends on what you want to accomplish on the guitar. I wanted to be like Randy Rhoads, Eddie Van Halen and Yngwie Malmsteen. The old saying, “It takes 10 years to learn everything then the next 10 years trying to apply it,” isn’t far from the truth. Up until about five years ago I had a pretty crazy practice schedule where I was working on country, gypsy jazz, classical, blues, traditional flamenco, traditional jazz, sight reading, technique and improvisation split between two days at about four hours each day and that didn’t include band rehearsals, gigs, jams or songwriting. I made a conscious decision when I started doing nuevo flamenco to stop all of that and focus in on my own style and voice. To this day I only work on things that I can immediately use. At some point I had to apply what I learned. But of course Jimmy Page is famous for never practicing, so maybe I’ve been going about this all wrong. Ha.

Zzaj: Who is the artist or group you would most like to play with? Why?

Russ: It’s hard to say. That’s like asking who my favorite guitar player is. I’m at the point where I enjoy playing with any musicians who are good at their craft regardless of the instrument. Some of the best players I’ve had the opportunity to jam with aren’t famous or have a big name. I’m also a lot more open now to putting myself in situations that are out of my comfort zone and continuously challenge my playing.

Zzaj: You’ve just released your second CD, Alma Vieja (reviewed in issue # 117). What’s your next project? Will you be doing some kind of tour? If so, where and when?

Russ: I recorded a live concert in June and I may release it as a CD or DVD sometime next year. I’m also planning to release a Christmas CD as well and package the two projects together. That should buy me some time to write the next batch of original songs. Ha. I’m currently working with several booking agents on expanding beyond my region and I hope to get overseas sometime in 2012.

Zzaj: My personal belief is that music can heal much of the trouble in the world. “What are your thoughts?”

Russ: Music has the power to heal many things but it starts at a young age. I think it’s sad they’re trying to cut music programs out of school because learning music develops your thought process, creativity, ability to work with others and problem-solving skills. It’s hard to explain or convey that to someone who has never taken music in school or played an instrument. Music can also bring together people with different religions and skin color to a concert or an event, which should be a sign that we all have a lot more in common than we think. You see it all the time: If there’s a disaster that needs to raise money or a cause that needs more awareness, someone organizes a concert or show and everybody seems rally together.