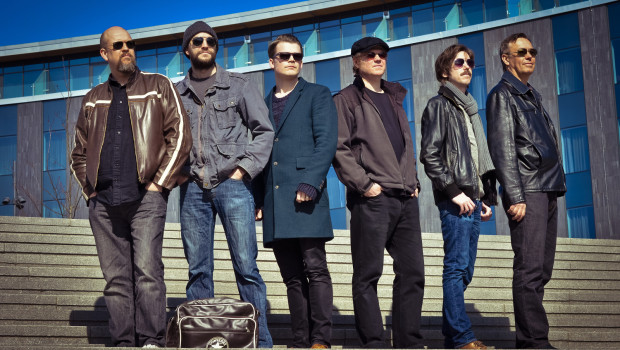 I first started reviewing this great jazz band back in late 2007, or early 2008… I was enthralled quickly with their upbeat and talented playing, and decided it was time to get them in here for an interview… Daniel Lantz, one of the mainstays of the group, answered my questions very insightfully and with great gusto… thanks, Daniel!

Zzaj:  As you know, I’ve been diggin’ & groovin’ to your group since “way-back-when”; when did Beat Funktion start; is it the same group now, or have you added/changed a lot of players?

Daniel Lantz/Beat Funktion: Thanks, Dick! I suppose when we got started back in 2007 we were only five in the band, or what was to become the band, and there were a few different people from time to time, but as of 2008, when we got our drummer and bass player, and our guitarist in 2009, you could say that today’s line-up was decided. Since we are as many as six, we are used to having substitutes from time to time as everyone is very busy with other projects as well. It needs to be that way.

Zzaj:  Being from Sweden (where I don’t imagine a lot of “funk” music is happening), what made you to go the funk/jazz route with your music?

Daniel Lantz/Beat Funktion: Well, as I said we began back in 2007, I suppose as a result of a one-off gig at a student party. We were supposed to play old-school jazz for young students. I felt that wouldn’t work very well, so I sort of re-arranged jazz standards into funky versions to somehow modernize everything, if you know what I mean. It was a smart move, cause we kept people on the dance floor the whole evening, and we were playing stuff like, Gershwin’s “Summertime”, you know. It was a very odd experience. That song is from, like, 1929 or something, and these kids were 20 years old and were dancing to it in 2007. So that’s when I knew that this type of funkified jazz music could work better than mainstream jazz, across generations, and I began to pursue and develop the concept.

Zzaj:  Your latest album, Green Man, featured a lot of vocal work, something I hadn’t heard the group do before… again, what inspired you to go with this new approach to your ultimately hip music?

Daniel Lantz/Beat Funktion: Yes, well, “Green Man” was a kind of try-out to see what would happen with our music if we made it very “vocal”. A lot of friends of mine, who didn’t enjoy Beat Funktion very much in the past, suddenly began listening attentively as soon as we had vocals on top of what we did, that was actually “Olympus”, the album before “Green Man”, where we used vocals properly for the first time on a couple of tracks. My conclusion from that became that vocals reach out well to people in general, a lot better than instrumental music, so in many ways “Green Man” was a kind of maxed-out experiment to see if we could reach a whole new group of listeners, those who weren’t jazz-funk nerds. And so far it seems the album has done that, actually. A lot of soul, pop, r&b and blues people – and just average music-fans – seem to appreciate what we have done here. We have broadened our horizons.

Zzaj:  Daniel, are you the primary composer for each of the tunes, or is it more of a collaborative effort?

Daniel Lantz/Beat Funktion: I have to say I have written almost everything so far. Our sax player Olle Thunström, however, wrote “The Great Escape” from the “Moon Town” album, which is a very nice song. But anyhow, it seems I have had most of the inspiration for this type of music and I have been very productive in general over the last few years, so I have just carried on. It seems the guys are happy to do the playing while I do the composing, or they would have protested by now. And I guess one positive thing about having one and the same composer is consistency in style and sound, of course.

Zzaj:  Beat Funktion’s last tour of the U.S. was a couple years back… do you plan on touring here again anytime soon?  If not, where will you be touring this year (if at all)?

Daniel Lantz/Beat Funktion: Well, tough visa procedures make things difficult for overseas musicians to tour the US, at least legally. So, after our last tour we got sort of a bit scared off by all the hassle dealing with that before we could go. So we have recently decided to shift our focus over to Europe and Scandinavia, where it seems we will be touring next. However, the US is where most of our fanbase is, so it still makes sense to keep in touch with our people over there, and surely our music will still be available for fans globally. For live shows we may well go back to the US at another point in the future, provided we hook up with the right people to make it happen properly. But not just right now.

Zzaj:  Daniel, your own background and training on keyboards appears to have been in classical music… how on earth did you wind up in a funk band?

Daniel Lantz/Beat Funktion: Haha, well, like many other jazz performers my very first contact with music was with classical stuff. And for me it was not only piano music, but also orchestral symphonic pieces by the 19th and 20th century composers. I guess one of my big interests back then was orchestration, how instruments together created a certain sound. That’s why I also was fascinated by film music, and how certain sounds and melodies could create certain moods with the listeners. It still intrigues me, and scoring for a big orchestra is such an artform in itself. So, yes, certainly classical music has been very important, and still is. Other than that, I guess I am a cross-over type of guy, who enjoys all sorts of music. That’s why Beat Funktion, with its cross-over qualities, is a good match for me.

Zzaj: Does your classical work help you with the jazz side of things (do you think)?

Daniel Lantz/Beat Funktion: I suppose it helps in understanding the structure, not only of jazz but of music in general. And when it comes to piano playing, classical technique exercises are so useful just to get your hands and fingers ready for improvisation. I suppose having a good classical piano technique is very handy regardless of what style of music you do.

Zzaj:  I’ve no doubt you’re going to score big with Green Man… what’s next for Beat Funktion?  Do you have any brand-new albums cooking for release soon, or will your focus be on tours & such?

Daniel Lantz/Beat Funktion: Well, we are definitely into getting out on the road more, so we expect to see more live gigs from now on. As for albums, looking to the future, I think it’s time to touch base, sort of. We have discussed briefly in the band that the next album may be recorded “live” in the studio, which means everyone of us plays in the same room and then we just pick the best takes. That’s what we did with “Voodooland”, and that type of recording does something with our music that is very good. I have a feeling the next album will be all-instrumental, too. Just to touch base.

Zzaj:  How much of the “techie” stuff do you get involved with?  Do you supervise the mixing, or leave that primarily to the gearheads?

Daniel Lantz/Beat Funktion: Yes, I do in fact enjoy the techie stuff, and have begun to do more so over the years. I am self-taught at mixing, but I have been at it for quite a few years now, and I have a pretty good idea of what I want to achieve sound-wise with my music. A clear direction is perhaps most important of all when you mix. And being the composer of Beat Funktion’s songs it has become natural for me to also do the mixing. It’s more or less an extension of the compositional process from my point of view. And it’s so much fun, too.

Zzaj:  You spent quite a bit of time & energy on putting together a full set of videos for the Green Man release… where can fans check them out?

Daniel Lantz/Beat Funktion: Yes, the video episodes was a promotional idea from our management to begin with. And it made sense, since the videos introduce our guest artists. Interview videos like those are so good, you kind of become intimate with the actual person who performs, it comes alive, sort of. So personally I think those videos bring life and dimension to the album itself. They are all available on YouTube and on our website.  Nine of them. There’s plenty of footage in there when we record and rehearse the new songs, but also each artist gets a chance to tell their stories of how they got into music, which I think is always very interesting.

Zzaj:  Many of the readers here are aspiring artists themselves… do you have any “words of wisdom” for them?  Would it be better for them to focus on a “day-job”, with music as a “side thing”, or do they need to devote all their time & energy to musical pursuits in order to “make it” in today’s environment?

Daniel Lantz/Beat Funktion: Well, one should have dreams and one should try to make them come true. Without dreams and aspirations, nothing can happen. Having a type of day job is of course very good even if you decide to do music seriously, since music is such an unreliable income. To be able to survive on music alone I’d say you either need to be a very street-smart entrepreneur, or be lucky and be able to have a break-through. Whichever path you end up on, you will need to work hard to keep things going, regardless. Music is not a lazy job by any means. Most musicians need to be creative and inspiring while they struggle, and can only keep on with music if they do a lot of corporate gigs, have a part-time job, or work as music teachers. It’s sad it has to be that way. Live musicians are also very, how shall I say, under-valued in general in society. It can sometimes be very difficult to be paid properly by venues. In some instances, musicians are even taken for granted to play for free. Which is ridiculous. It undermines the musician as a profession. I mean, who would ask a dentist or a plumber to work for free? But the problem is that doing music is a passion job, you need the full passion to make it good, and your passion is what keeps you going, even if you don’t happen to make any money out of it. And I guess that is something people are aware of, which makes it harder to get people to pay you for playing. I guess if you’d ask any musician why they are doing music, they’re not gonna say it’s for the money. It’s for the spiritual experience, the passion, the connection to something greater than ourselves.