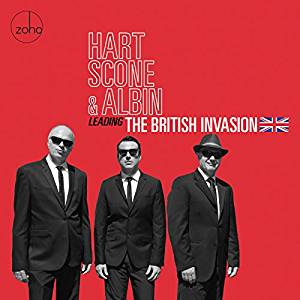 Hart, Scone, & Albin fascinating jazz ensemble Hart, Scone, & Albin – LEADING THE BRITISH INVASION:  This great album features John Hart’s guitar, Hammond organ from Adam Scone & drums by Rudy Albin Petschaue, and man do they ROCK it!  Of course, since I’m a keyboard player myself, it goes without saying that Adam’s Hammond work was the “main attraction” for my ears, to be sure… just scope out the 6:07 “Don’t Start Lying To Me Now”, & you’ll hear what I mean (samples aren’t up yet, as it doesn’t release until February, but I’ll be back to plug them in when I’m made aware of them being posted)!  Just as a minor critique – it would have been nice to have a YouTube video available..

John’s splendid jazz guitar has been reviewed here many times before, though it’s been awhile… issue # 68… his ultra-talent just shines on this one, though… you’ll find yourself in jazz heaven as you listen to him on the super-funky “Smooth Operator Royals”… &, once again, Adam’s Hammond just KICKZ’ out those jamz!

In some sense, this album brings back to mind a great old album called “Super Session”… & when you listen to the mighty mellow “Blues For The UK”, you’ll “grok” my love for the trio’s music right away.

With just over a full hour of music, & eleven solid jazz tunes, it was a bit more difficult than usual to choose my personal favorite… but, hands down, it is their rendition of soul star Joss Stone’s “Don’t Start Lying To Me Now” that won!  Smooth & funky, all the way from the opening note to the very last bar, & I can’t stop thinking of Paul Butterfield on this one.

I give Hart, Scone & Albin a MOST HIGHLY RECOMMENDED, with an “EQ” (energy quotient) rating of 4.98 for this fine release.  Get more information on the Zoho Label page for the album.        Rotcod Zzaj

Serendipitous soulful jazz The Chris Saunders Band – Dancing With The...