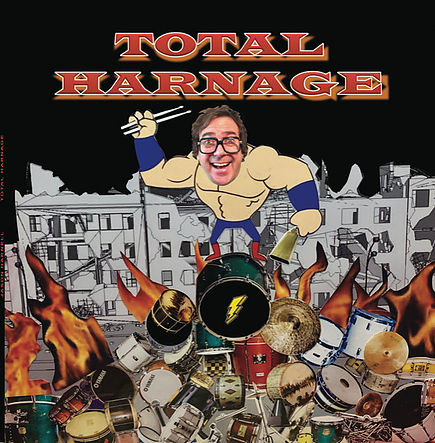 Groundbreaking experimental album Jason Harnell – TOTAL HARNAGE:  I can tell you right now, Jason Harnell’s drumming on his new album is the first I’ve listened to in 2019 that is truly groundbreaking and experimental, as the title proclaims… don’t just take my word for it, though, check out the insanity he projects in this video of “Thirty Eight” (from the album):

…in order to get the full range of Jason’s oddities, be sure to SUBSCRIBE to his YouTube channel, too… I did.

The track “Lullaby” (no samples, yet, I’ll add them when I’m told they’re available)  may not put the baby to sleep, but it will certainly give the kid a sense of the tunnel that life can be!

If you’re looking for “modernity”, you’ll certainly enjoy Jason’s interpretation (and addition of drums) on George Crumb’s “The Magic Circle of Infinity”… it definitely will NOT be what you “expect”, lol.

For an absolutely enjoyable “singing” parts, you’re going to love “What Thing?” (loosely based on Cole Porter’s “What Is This Thing Called Love”)… like, ah, very loosely… a truly cool song that uses layered singing to enhance the experience!

It was (unquestionably) the closer, “Bloom”, that was my choice for personal favorite of the dozen sonic wonders offered up… believe it or not, it’s played alongside an iPhone application developed by music pioneer ‪Brian Eno and software designer Peter Chilvers.

I give Jason’s highly original work a MOST HIGHLY RECOMMENDED rating, with an “EQ” (energy quotient) score of 4.98 for this fine release.  Get more information (and purchase) on Jason’s page for the album.           Rotcod Zzaj