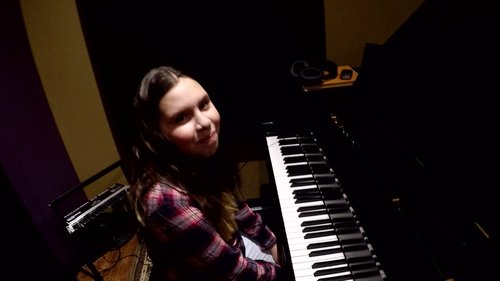 Faith Angelina’s captivating story Her story is a very captivating tale, but her musical talent at such a young age (she was 12 when she finalized this album) is even more intriguing…

A little over a year ago (August, 2016), Faith penned a note to her mother, indicating that she was having suicidal feelings due to depression… of course, since she is from a family that cares, they had her visit their Doctor right away, who found out that she actually was suffering from a hormonal imbalance that was causing her to feel that way.  Too many children (and adults, too, for that matter) don’t have families who support them with that kind of rapid response.  The medications the doctor prescribed helped her to begin an immediate recovery process… she wrote this simple, yet beautiful, song, and in her own words, says “This song was a turning point for me as I looked for help from my destructive feelings and found the love and support that was always within my reach“.  The key to her writing and playing is that she “keeps it simple”, but also understands how to engage the listener in very effective ways.

Stay tuned for our next song/story in this series… we will write about several of the songs she composed for her Reaching 12 album (click the link to read my review of her full album); Faith is also preparing to record a new album in the middle of next year, so we will use this series to follow her as she moves towards that goal.  In the meantime, please go to her YouTube channel and SUBSCRIBE to it!  Then, tell all your friends about her high-talent playing, so they can do the same.