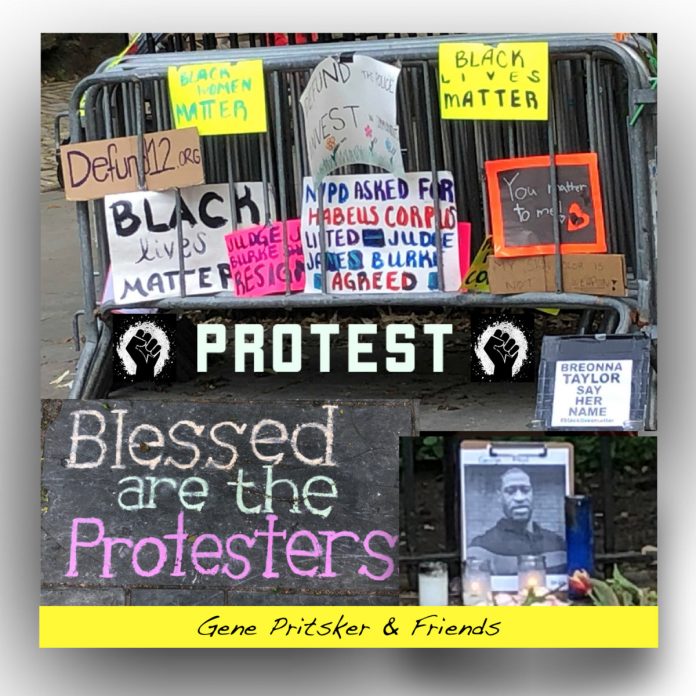 Delicious musical dissent Gene Pritsker and Friends – PROTEST:  Multi-instrumentalist and composer Gene pulled together friends from around the world with brand-new compositions and remote recordings that offer up delicious musical dissent… the video below isn’t from the new album, but it shows the wide range of talent Gene (always) pulls together for his compositions…

The title track, “Protest“, opens the album with Gene’s guitars and soaring violin from Vesselin Gellev… there’s a heavy feeling of Frank Zappa here, albeit with a true 21st Century vibe that DJ’s everywhere are going to zoom in on and choose for their playlists!

If you’re into “rap”, you’re gonna’ totally DIG down deep as you listen to “What Matters“… with Gene rappin’ and Sophie Dunér doing voice and Magdalena Stern-Baczewska playing harpsichord – harpsichord?  on a rap song?  You’ll be amazed at just how well it works on this 3:47 gem, and will help to keep the spirit of opposition alive and well.

On “No Justice, No Peace“, you’ll enjoy Sebastian Pritsker on melodica, Gene Pritsker’s electric guitars, Alex Bayer’s bass and Simon Springer doing drums… the song provides an odd sense of calm resolve to overcome “the man” that is most attractive!

The jarring discord on “Hands Up, Don’t Shoot” will make you feel as though you’re in the middle of a headline ripped from the Minnesota madness that caused George Floyd’s demise at the hands of those “little piggies” who perpetrated that particular vista of violence… one of the strongest protest songs I’ve heard since the 1970’s.

Gene always offers up diverse creativity, and on “Love Through Chants A Thousand-Mouths Wide“, featuring poet Erik T. Johnson, the graphic words truly tell the story of the album… we MUST speak out, we must FEEL and act together to take our world back… this was my choice for personal favorite of the dozen songs offered up!

I give Gene and his musical friends a MOST HIGHLY RECOMMENDED rating, with an “EQ” (energy quotient) score of 4.99.  Get more information on Gene’s website.         Rotcod Zzaj