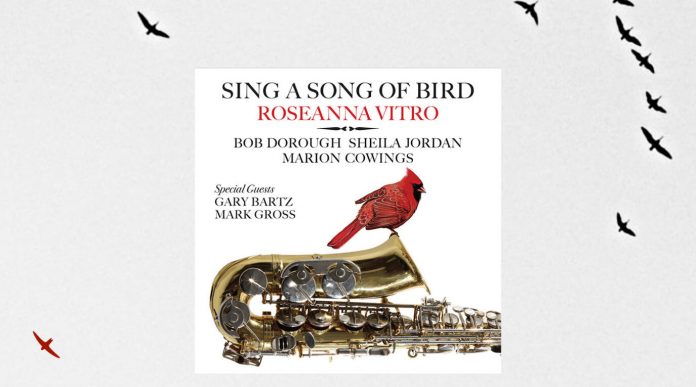 Charlie Parker celebrations Roseanna Vitro, Bob Dorough, Sheila Jordan, Marion Cowings – SING A SONG OF BIRD:  When I reviewed Roseanna’s “Listen Here“, I knew we would be hearing much more from her… on this new album of Charlie Parker celebrations, she takes it over the top of the line… first, to get an up-close look at her stimulating performance style, watch this video…

…be sure to SUBSCRIBE to Roseanna’s YouTube channel, where you’ll find a LOT more wonderful jazz to groove on.

Roseanna and Bob traded exciting vocal licks on “The Scatter“, which is based on Bird’s “Red Cross”, with lyrics by Bob… upbeat & (definitely) uptown, I predict that jazz DJ’s around the globe will be adding this to their playlists for constant rotations!

Sheila penned the lyrics for “Quasimodo” to tell listeners just how important the Bird and his music were to her… an absolutely swinging tune… lots of stellar players, which you can scope out on Roseanna’s website.

“Audubon, The New Bluebird“, based on Parker’s “Bluebird”, was my choice for personal favorite of the dozen delightful re-imaginings of Charlie’s classic tunes… this song helps to distinguish Roseanna’s release from all the other “tribute” albums… it will go down in jazz history as part of Mr. Bird’s extensive legacy!