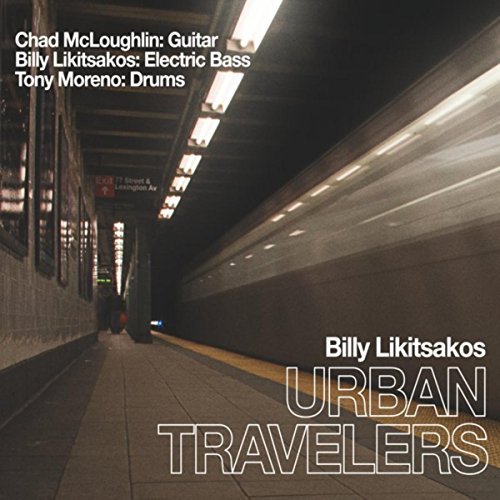 Billy Likitsakos sweet bass-led jazz trio debut Billy Likitsakos – URBAN TRAVELERS:  There’s really nothing sweeter (for a reviewer, anyway) than getting referrals from other musicians I’ve reviewed… Billy’s debut jazz excursion features him on electric bass, Tony Moreno doing drums (Tony also produced the album) and Chad McLoughlin on guitar (reviewed recently in our pages, as well), and it’s among the best debut CD’s I’ve heard (yet) in 2018.  In fact, Chad referred Billy my way, and (as James Taylor would say) “how sweet it is“… just listen to the beautiful “The Salton Sea” to get a feel for the music Billy & his pals make real for you… you can also watch a video of the trio in action at a gig in Queens on that song here…

…though this video gives you some real insights into the trio’s action together, and will let you get familiar with their playing styles, I would love to see a live video of all the players shot specifically with attracting more listeners/viewers for the next album release… since you’re there already, though, go ahead and subscribe to Billy’s YouTube channel… I expect you will see a lot more from this shining young talent being posted over the coming months & years.

Another tune that really caught my ears is “Carmen and Lola“… lots of movement, and the interaction between all three players is so seamless you won’t even know it’s a trio… they are truly tight on this great song.  I can tell you right now, you should expect much more coming from Billy and his playing pals!

Billy started playing and composing in seventh grade, in (of all places) Paris, France… now, that’s a really (REALLY) cool thing, because it gives him a cultural depth that so many U.S. players can never bring to the studio.  For this listener, the song that shone most brilliantly also establishes Billy’s credentials as a high-talent player is my personal favorite of the seven he offered up on his debut… “As of Yet” is done at a leisurely (yet fully engaging) pace that will make you feel like the trio is right there in your living room playing for you personally.  Ultra-cool.

I give Billy and his mates a MOST HIGHLY RECOMMENDED, with an “EQ” (energy quotient) rating of 4.98.  Get more information on Billy’s CD Baby page for the release.        Rotcod Zzaj