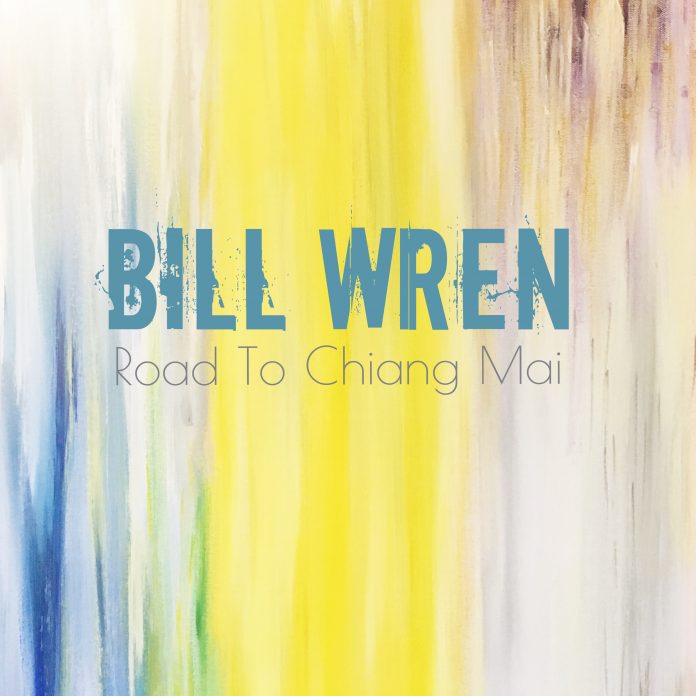 Bill Wren – Road To Chiang Mai:  This is Bill’s third release, & I’ve reviewed each one with increasing anticipation for the next.  After some personal tragedies hit him hard, he wound up (as artist-types often do) re-thinking where he was at & what he was doing!  After re-marrying around 2012 (I believe), he went on a honeymoon trip to various places ’round the Pacific, and a part of that was an extended trip to Thailand.  As I listen to compositions like the beautiful “Harmonia“, it’s very easy for me to picture some of the lush scenery in Thailand, and it brings back memories for me of long motorcycle treks through the entire northern part of the country (some simple, but lush, vocals are absolutely grand).  What most sets Bill’s work apart from other composers is his innate ability to use the sonic to enhance the listener’s images of what Bill was seeing when this music was first conceived.  From a personal perspective, Bill said he felt that the 2:59 “Ebb and Flow” came close to signifying his personal transitions during the difficult times after his first wife’s passage, and as you listen to it, you’ll hear (in most intimate detail) the sadness/joy/emotion he was feeling when the piece was realized… I just loved the keyboard and harp/string interplay on this piece.  Of course, he wasn’t alone in putting this marvelous music together, either… his musical partner Frank Ralls (who has been with him on each of his three releases) produced this one & so had a great amount of influence on the finished album.  The title track, Bill’s composition of “Road To Chiang Mai“, is both powerful and subtle at the same time (something I experienced a great deal when I lived in Thailand)… strong influence of the Orient shines through (I can easily visualize those elephant trains carrying the opium south to Bangkok as I listen to this – whoops – that’s another story, lol).

One of the things that was most impressive for me during my own travels between Pattya Beach, Korat and all the towns in between was the friendly spirit of the people in the country, and my personal favorite song of the thirteen offered up for your aural pleasure captured that friendliness in a most amazing way – “Enchanted Kingdom” will lift you out of whatever “bad place” you may be (or have been) in, and make you realize with full-string orchestral airiness and abounding POWER that a life well-lived, especially through the times of darkness, is truly what you’ve always been after.  Bill, Frank and the whole crew of players who did the music (Electric Guitar, Acoustic Guitar, Mandolin, Banjo: Micah Gilliam; Electric Guitar: Judson Crane; Bass Guitar: John Gibson; Live Strings: String Mob LA; Penny Whistle: Jim Farrelly; Drums, Piano, & Orchestral Programming: Frank Ralls; Voice: Aubrey Logan, Ben Bram, Tim Davis; Violin Solo: Ann Marie Calhoun; Cello Solos: Ben Lash, Judy Kang, & Nick Curry) turn in a performance that you won’t soon forget!  I’m more than “just impressed” with the music created here, and give it a MOST HIGHLY RECOMMENDED, with an “EQ” (energy quotient) rating of a (perfect) 5.00 – meaning that it also gets the “PICK” for “best and most inspiring orchestral work”.  Get more information at Bill’s website.       Rotcod Zzaj