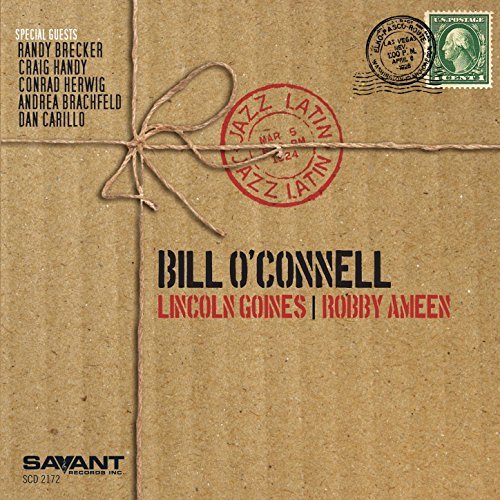 Bill O’Connell expressive experimental Latin jazz Bill O’Connell – JAZZ LATIN:  Wow!  It’s been a while since I reviewed Bill’s fine piano and Fender Rhodes work in issue # 156, but he certainly hasn’t lost “the touch”, and his music is always an event to be anticipated… he’s got a great cast of players working with him… Lincoln Goines – electric bass, Robby Ameen – drums, Randy Brecker – flugelhorn (track 5), Craig Handy – tenor saxophone (track 3), Conrad Herwig – trombone (track 8), Dan Carillo – guitar (tracks 5 & 9), Andrea Brachfeld – flute (track 6)… just listen to their performance on Wayne Shorter’s “Footprints“, and you’ll be a believer in only seconds… the recording is flawless, and the pacing is right on the mark!

To get a real “close-up” feel for how Bill & his players work, watch the cool little video trailer/teaser they put together for the release…

…as he points out in the trailer, these players work REALLY well together!

Since I so love the Fender Rhodes (I played it on several of my own recordings), it only took moments to fall TOTALLY in love with their high-energy performance on “Quicksand“; in fact, it’s my favorite Latin tune (yet) in 2018… Andrea’s flute on this tune is just superb!

If mellow is the mood you’re in, you’ll find the beautiful & laid-back “Mom’s Song” repeating on your player over & over again… Dan’s guitar weaves most tastefully through the whole song… loved it…

My personal favorite of the eleven great performances offered up is a song composed by Chico Buarque/Antônio Carlos Jobim, titled “Zingaro”… Bill’s piano work on this one will just dazzle you… it’s going straight to my iPhone player, a privilege only reserved for a few artists… timeless Latin jazz!

I give Bill and his players a MOST HIGHLY RECOMMENDED, with an “EQ” (energy quotient) rating of 4.99 for this superb album.  Get more information on Bill’s website.       Rotcod Zzaj