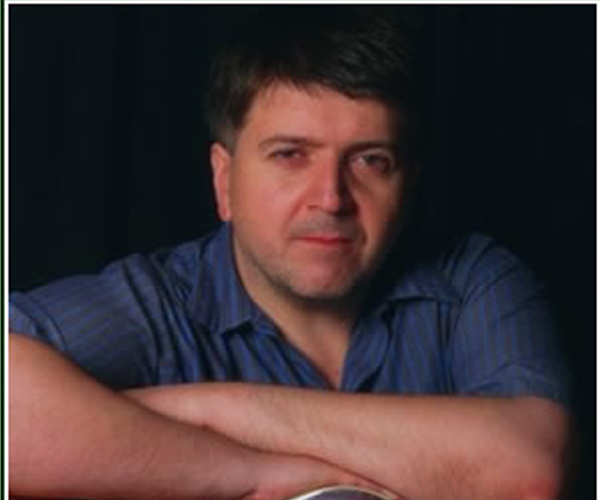 I believe it was about 2003 or 2004 when I was first sent copies of MOONJUNE CD’s for review… if I remember correctly, they were from Dennis Rea… of course, I did the writeups almost immediately, since Dennis is such a monster player.  It took a while for me to get to know the MOONJUNE label‘s chief cook & bottle-washer, Leonardo – but, since the best way to know someone from a label is from the music they send you, it was easy to recognize his ABSOLUTE talent in picking the best in progressive rock, ethno-jazz, experimental, avante-garde, jazz-rock or anything in between!  So – obviously – it’s important to get his story in his own words… enJOY!!

Zzaj:  The bio on your MOONJUNE pages doesn’t give my readers a whole lot of background about where you “came from”, & what brought you to “where you are now”.  Please tell us where you were born, when you got interested in music & where you see yourself five years from now (musically, anyway).

Leonardo: I was born in the former Yugoslavia, in today’s Bosnia & Herzegovina of a very mixed ethnic background. My ancestors are not from Bosnia, that’s where they ended up after WW II. I lived the whole 80’s in Italy where I studied at the University of Bari and have lived in NYC since the Summer of 1990. I was always into the music and started collecting albums in my mid teens.

Zzaj:  Do you have a “favorite style” of music, or are you particularly interested in what a player/group “projects” with their music (regardless of the genre they wind up getting pegged in)?

Leonardo: I like many styles of music. I equally love Miles Davis, the early Black Sabbath, John Lee Hooker, Paco de Lucia, Robert Wyatt, Van Der Graaf Generator, Milton Nascimento or Dewa Budjana. It’s true that in past 10 years I predominantly dig the music that has elements of jazz, experimental and ethno and I have immensely decreased the listening of any music that has lyrics. I would say, 95% of the music that I am listening in past decade is purely instrumental.

Leonardo:No, I never played any instruments, but Dewa Budjana promised me I will play a diangle on one of his upcoming albums.

Zzaj:  How do you manage to travel so much (Indonesia, Japan, all over Europe & the USA) and still keep up with all the various artists on the MOONJUNE label?

Leonardo: I run a boutique label, and that’s not my source on income; I make my living booking artists, not necessarily on my booking roster or label, but I facilitate bookings in Asia and Latin America for many of my friends and customers and in any music genres, and for most of what I do, it’s not known in the public domain. I travel a lot, accompanying my artists, but also conducting my other businesses, and there is nothing better than seeing past, present and potential future customers face-to-face. I have been to 77 countries already and I do not have any intention to stop.

Zzaj:  How do you “select” a musician/group to be a part of your label?  Is it primarily from artist submissions, referrals by other players, or do you do some form of “audition” for an act you want on your label?

Leonardo: Thing happened by magic; I do not “accept” demos in traditional way… all musicians on my label are my friends, some very old friends, some friends for many years and some recent friends. There is no such thing as “submission”, things are happening because they are simply happening.

Zzaj:  As you know, I review music from many different labels… your MOONJUNE label is among my favorite, no doubt… tell my readers why MOONJUNE is the “perfect choice” for their listening needs.

Leonardo: Thanks. I do not believe in perfection, and there is no such thing as perfection, but people either enjoy or do not enjoy any kind of music. I just hope that as many people who are your readers can enjoy what I do, and that they will enjoy the music of my friends who are releasing albums on my label. The best way for them to get a taste of what I am releasing is to get a sampler, that includes 75 tunes from 75 albums which is almost 8 hrs of music and for only $5, if that’s not a deal of the century, then what is the deal of the century!

Zzaj:  Do you believe “music with a message” is important, or should the primary component be the “energy” generated by the music the players generate?

Leonardo: Music with lyrics can be music with message… somehow, instrumental music sends another message, to me much deeper, visceral and subliminal.

Zzaj:  You always have lots of new artists, projects and tours going on… please give my readers an idea of what they can expect for 2016 from MOONJUNE?

Leonardo:  I can anticipate some releases for the first semester of 2016: Vasil Hadzimanov ” Alive, featuring David Binney”; Beledo “Dream Mechanism” (featuring Gary Husband, Lincoln Goines, Dewa Budjana), Dewa Budjana “Zentuary” (featuring Tony Levin, Gary Husband, JackDeJohnette, Tim Garland, Danny Markovich, Guthrie Gowan and few more TBA); Boris Savoldelli with Raffaele Casarano & Marco Bardoscia “The Great Gig In The Sky  – Reinterpretation of The Dark Side Of The Moon by Pink Floyd; Dwiki Dharmawan “Pasar Klewer” (featuring Yaron Stavi, Asaf Sirkis, Giald Atzmon, Mark Wingfield, Nicolas Meier, Boris Savoldelli); the new album of Tohpati Ethnomission; World Peace Trio, an ethno-jazz trio featuring Dwiki Dharmawan, Kamal Musallam and Gilad Atzmon; Nicolas Meier, new album featuring Jimmy Haslip and Vinnie Colaiuta. And from the second semester going into the early 2017 I will release albums that will be recorded in the first semester of the new year: Mark Wingfield’s new album with Yaron Stavi & Mark Wingfiled with multiple guests on piano, keyboards; another album of Mark Wingfield with Markus Reuter and Asaf Sirkis; duo album of Dewa Budjana and Mark Wingfield; the farewell studio album of Soft Machine Legacy with special guest Keith Tippett; the new solo album of Boris Savoldelli featuring several special guests; Dusan Jevtovic’ new album featuring Vasil Hadzimanov & Asaf Sirkis; new albums of Gilad Atzmon and Xavi Reija; another projects of Beledo, Dwiki Dharmawan and Dewa Budjana; and I also would like to release a project featuring my old friend Dennis Rea. Plus some major surprises. I will not work with any “new” artist from now on, if there will be any new name, it will be always attached to a name I have worked with previously.  How I am going to do this all, do not ask me! I have no idea!!!

Zzaj:  Who are your “musical heroes”?  Let’s say, the “Top 5”, either from your label, or from the music industry in general?

Zzaj:  Because of your work with the label, tours and musicians, you probably have some “words of wisdom” for aspiring artists?  What will get an artist “instant recognition” from your ears?

Leonardo: Just lay and play what You like – not for any potential audience, but only for Your artistic fulfillment, play whatever comes out of You. That’s the music I like the best.